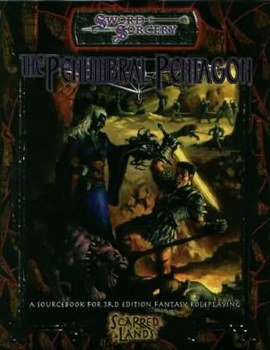 THE SECRETS OF SHADOW

When the Slarecians captured the goddess Drendari, they tore the secrets of shadow magic from her and passed that knowledge on to their servants, the Penumbral Lords. But the Penumbral Lords betrayed the Slarecians and stood by as the gods defeated their masters. Centuries later, the Penumbral Lords live on, and the most infamous of them is the dark elf known as Dar'Tan. Leader of the evil Penumbral Pentagon, Dar'Tan sought to conquer the city of Mithril from within. Defeated by the paladin Barconius, Dar'Tan escaped with his surviving followers and founded the Penumbral Fortress, from which he continues to plot and scheme.